OK guys.. this recipe is seriously A-M-A-Z-ING. I was holding my breath as I cut into the first piece thinking, “this is going to either be really good or really terrible.” I have a bad history poor results when baking with cocoa powder, especially when I am coming up with a recipe from scratch.

I was so pleasantly surprised at how rich, moist, and chocolatey this bread came out! It is super light and airy with an a little bit of banana undertone in each bite. Having trouble getting your kids (or in my case…. my husband) to eat vegetables? This is definitely a recipe to try! A little hidden zucchini never hurt anyone!

I had a few taste testers before I decided if this was post-worthy or not, and I got nothing but positive feedback! Most of the ingredients you should have around in your cabinet. I haven’t tried making it with any substitutions (for example brown sugar instead of coconut sugar), so I’m not going to promise that the taste or texture will be equivalent if you choose to switch things up. If you like chocolatey… be ready for a pleasantly easy surprise! Let me know what you think! 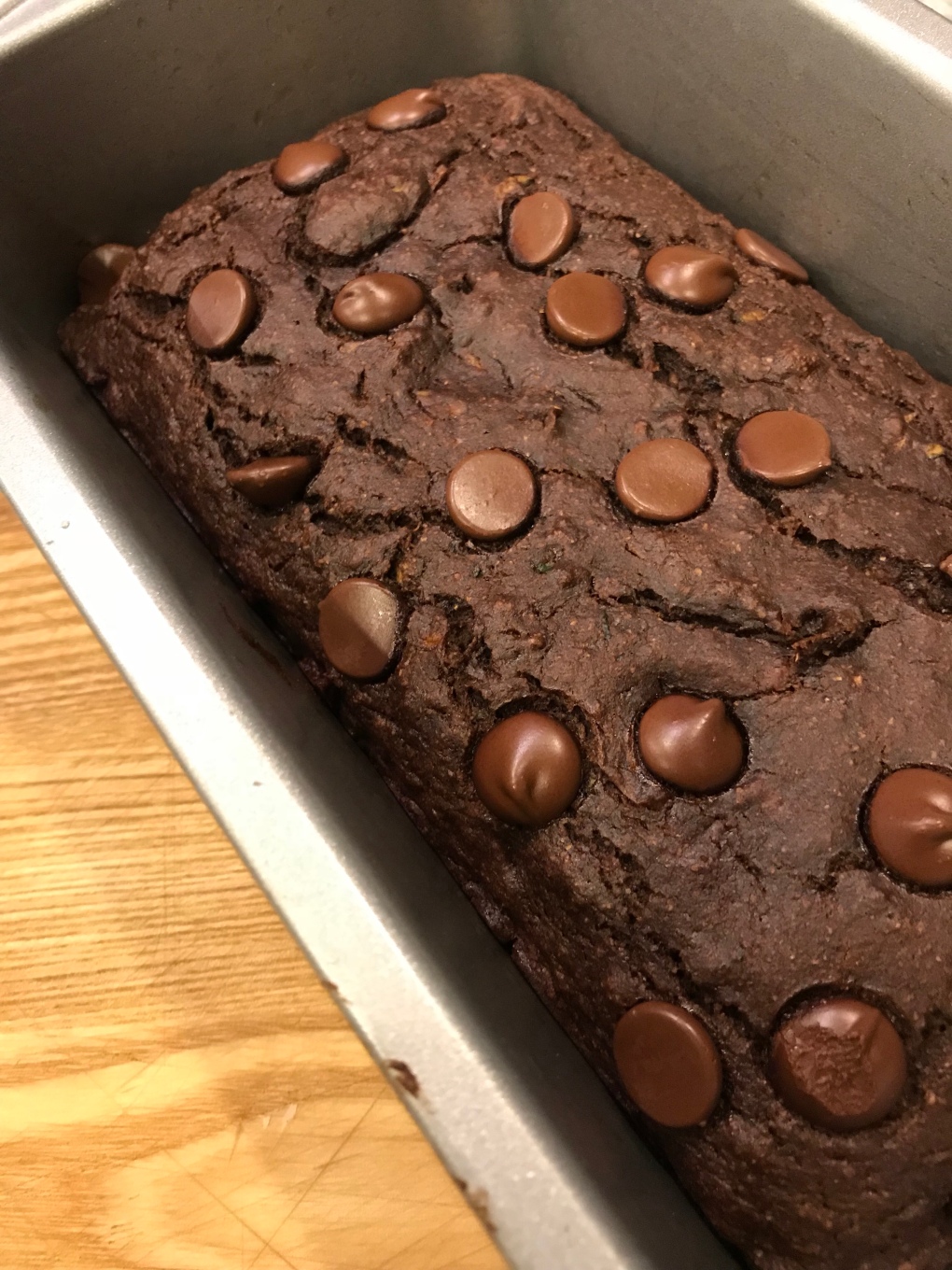 Shred your zucchini (I used a regular grater, but you can use a food processor or whatever tool you have at home). Press in-between a few paper towels to get rid of some of the extra water. Set aside.

Grease a loaf pan with oil or spray of choice. Evenly distribute the batter and put a few extra chocolate chips on top. Bake for about 30 minutes. Put a toothpick in the center at about 25 minutes to see if it is done (you don’t want to over cook!). Likely, the full 30 minutes will be needed!

Let the bread sit and cool for at least 10-15 minutes before cutting to serve. Cover with tip foil or plastic wrap to keep for up to 5 days. Enjoy!

Yes… they are as good as they sound! Hi everyone! I feel like I haven’t been on here in ages, but with good reason. I have some fun updates that I will share in a later post this week, but for now… the pumpkin bars! 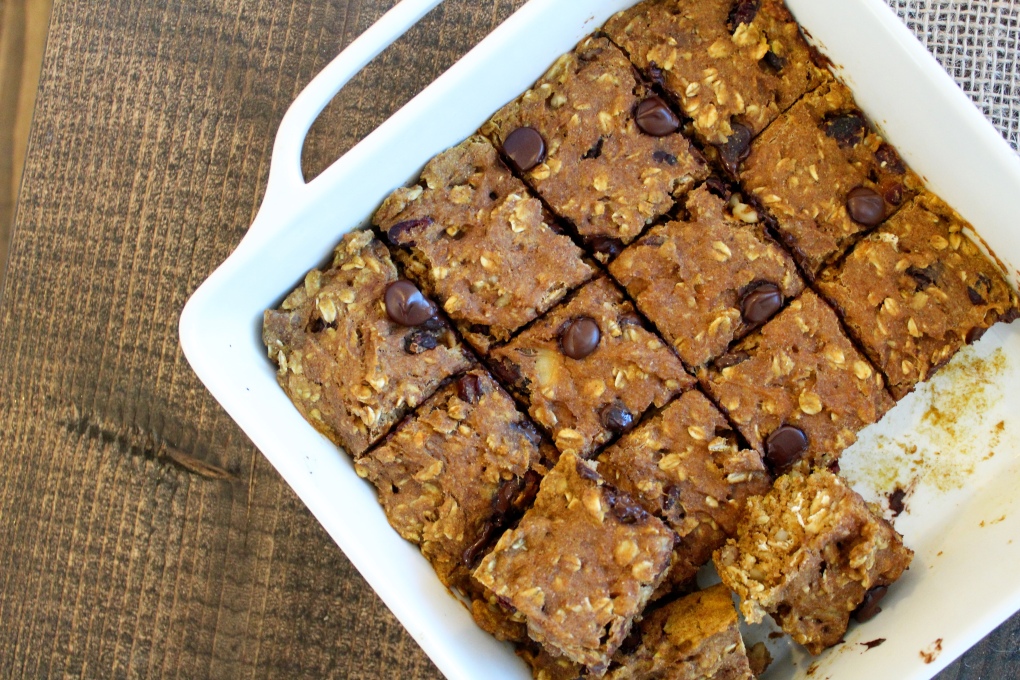 These are so easy, gooey, and delicious. I have eaten one literally every day since I made them and they are the perfect ending to any meal. The base of these bars are oats, whole wheat flour, pumpkin, and banana. They are sweetened up with a little dried cranberries and a few dark chocolate chips. They only take about 20 minutes to bake and last for ~1 week covered or in a sealed container (I keep them cold in the refrigerator).

These bars would be the perfect addition to a holiday brunch or get together with family and friends. They are not too sweet and provide just the right about of pumpkin flavor. I hope you give these lovely little bars a try! Happy December friends! 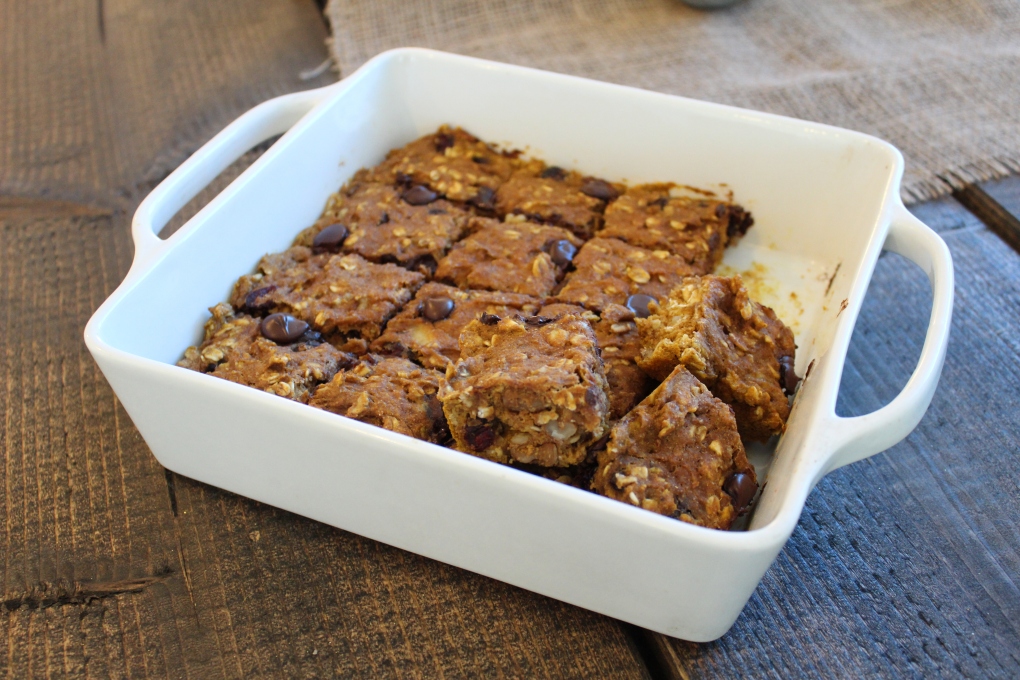 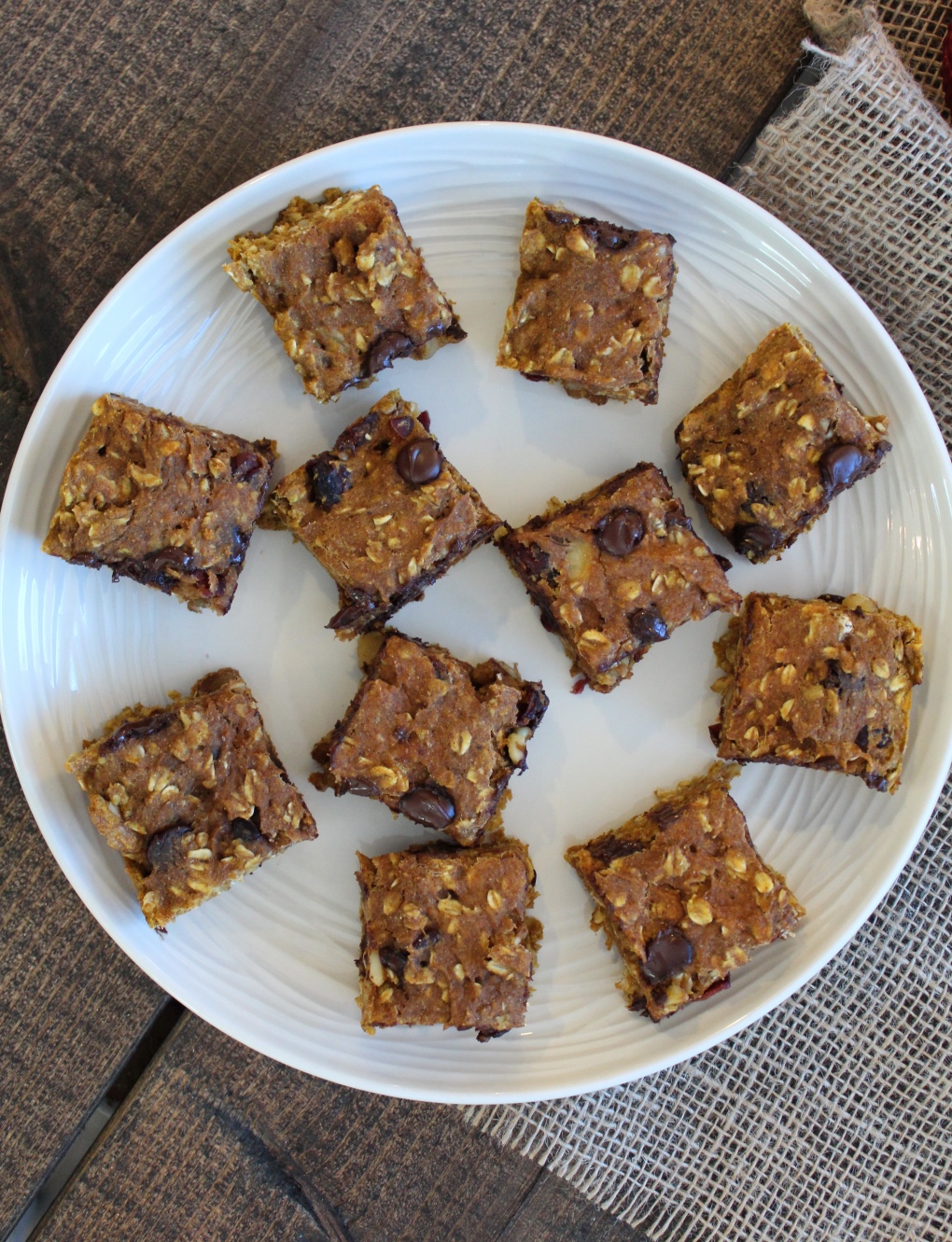 In a greased baking dish, pour batter and spread out evenly. I used a square 9×9 baking dish. If wanting thinner bars, choose a larger size dish.

Let the pumpkin bars bake for about 20-25 minutes or until the edges start to pull away from the dish. Allow at least 10 minutes for cooling before cutting into squares for serving. Store in an sealed container or in the refrigerator for up to 1 week.

It’s officially pumpkin season! You know, even though our afternoons are still hitting 100 degrees I am not letting the toasty walks to my car after work ruin my usual spring into fall foods and recipes. I have been itching to make something with pumpkin, so obviously my first go to was cookies! 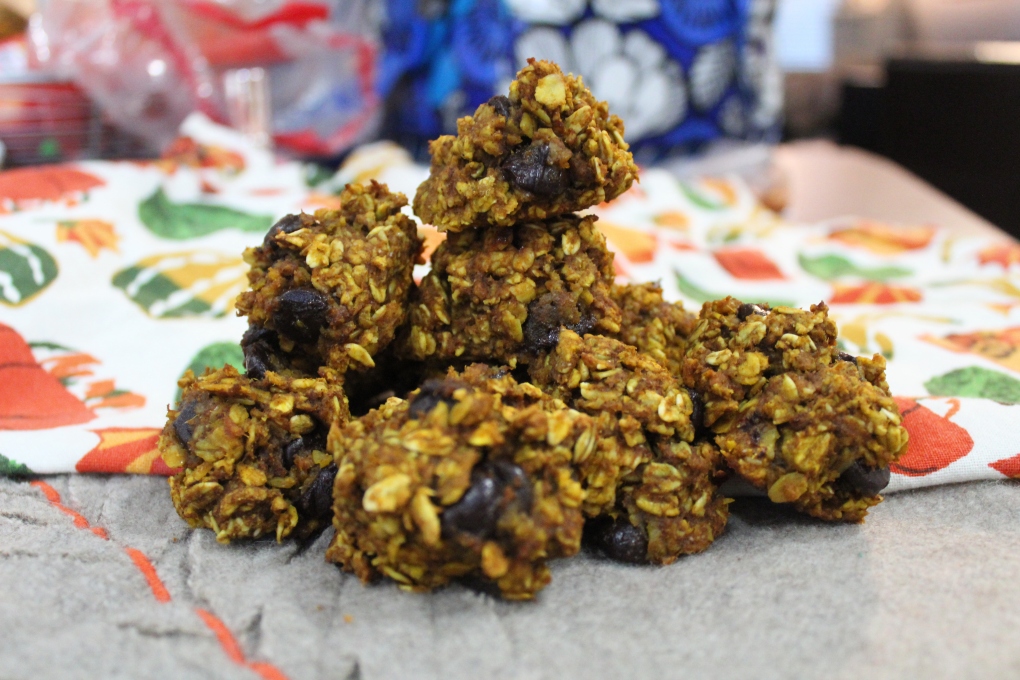 Quick side note… does EVERY nutrition/whole food bar company make a pumpkin spice version now?! Holy moly! My Instagram feed has been BLOWING UP with every food blogger out there posting about pumpkin Perfect bars or Rx Bars. I have to stay true to my favorite whole food bar brand Lara Bar; their pumpkin pie bar is amazing!

So a little about this recipe…

Its not low in sugar, it’s not grain free or vegetarian, and yes it contains fat. These cookies were made to be delicious and boy are they! I use whole wheat flour, oats, and pumpkin puree as my base with coconut oil and a whole egg for fat. Start your pumpkin season off right with these little beauties!

In case you read my last post, in terms of calories I’m not sure what the calorie content is of these cookies. Sometimes I will calculate calories for my recipes just to share here for extra info. I will say, regardless of the calories, these are freaking amazing! They are made with ingredients that are easy, simple, and many might already be in your pantry. I hope you give them a try, and as always let me know what you think! Happy Tuesday everyone! 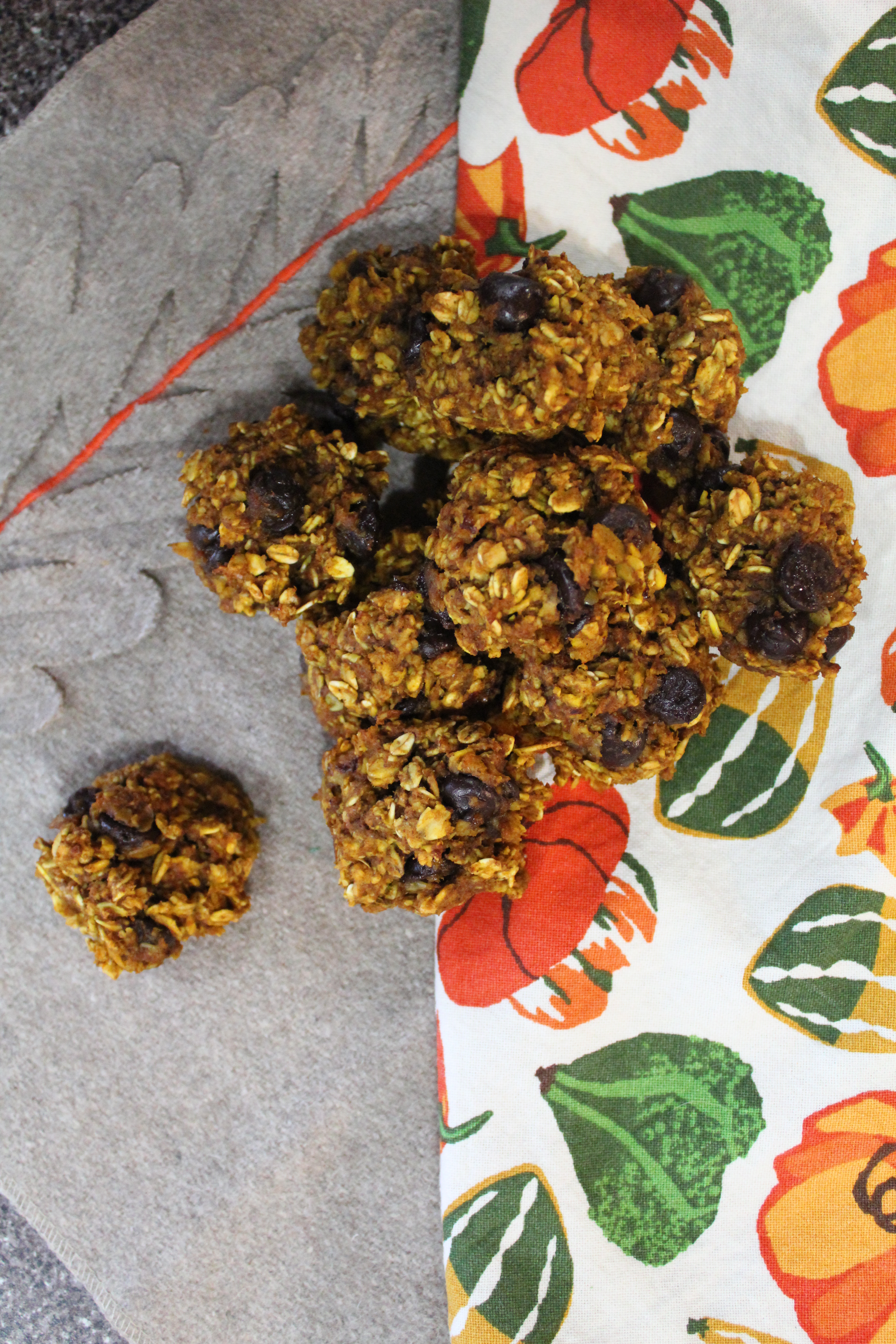 In a medium size bowl, combine 1 egg with brown sugar, coconut oil, vanilla, and pumpkin puree. Mix with a fork or whisk until brown sugar is well incorporated into wet ingredients with minimal to no lumps.

Add oats, flour, spices, baking soda, baking powder, and salt. Mix with a large spoon or fork until all dry ingredients are moistened. Lastly, fold in your chocolate chips or chunks (whatever your preference!)

Lightly grease a cookie sheet and scoop large spoonfuls about 1-1 1/2 inches apart. The cookies do not really spread out, so if you would like them flatter, lightly press down with the back of a spoon. Bake for 13-15 minutes or until they slide off the sheet easily without breaking. Let cool for 10-15 minutes before serving. Keep in an air-tight container for 3-4 days; refrigerate to keep for about 5-7 days. Enjoy!

HAPPY SUNDAY! This is such a good Sunday, want to know why? I am so, so, SO happy to be done writing my Master’s final defense paper! Yay!!! Everyone just cross your fingers that it goes well in a few week! Once this is complete, I will have one class left and then I’m officially done! How stinking exciting is that?! Two years truly flew by, and I’m so proud of myself for checking (almost….) this box! 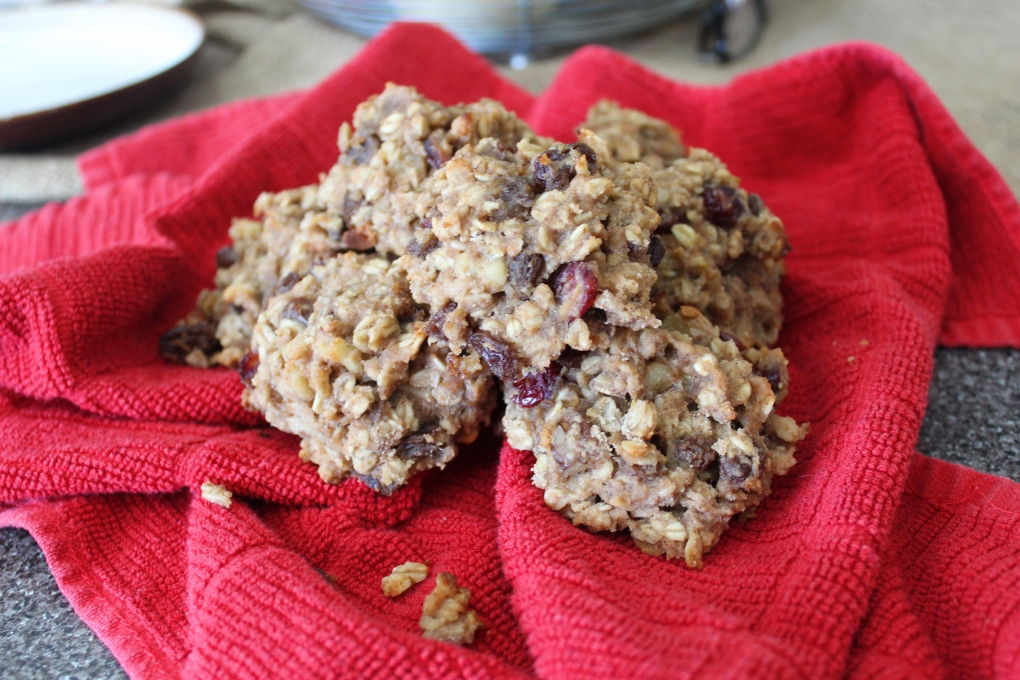 So with all this excitement, I thought I’d bake cookies! You know, any time I’m feeling an emotion — happiness, sadness, stress — the kitchen is always one of my safe havens. These cookies came out way better than expected, so I’m extremely excited to share them!

OK… this is kind of a funny (but not really) disclaimer, so all of you dog lovers please read! If your dog is like mine and absolutely loves peanut butter, do not let these cool near the edge of the counter! These cookies contain raisins, almond milk, and walnuts, which are all things that dogs should not have…. especially raisins! Our household spent quite a bit of time on the phone with emergency vets and pet poison control yesterday afternoon after Eddie decided to jump up on the counter and have a little taste test for himself. Thankfully, he is perfectly fine (and I probably over-reacted a tad), but I just thought I’d pre-warn you…. they really do smell THAT good!

Now that we got that out of the way, lets get to the recipe! These are super easy and perfect for a quick breakfast or pre-workout bite. I call these trail mix cookies because they have a lot of components of trail mix that I love such as dried fruit and nuts. I made this cookies fairly large, but you could always make them a little smaller to increase the final quantity. Because I made larger cookies, I got about 12-13 out of my cookie dough!

I hope you give these a try! I recommend you play around with different tastes and textures if you are feeling creative. Maybe try adding coconut shreds or using different nut butters! Let me know what you think, and as always you can message or comment with questions or general thoughts! Have a great Sunday everyone! 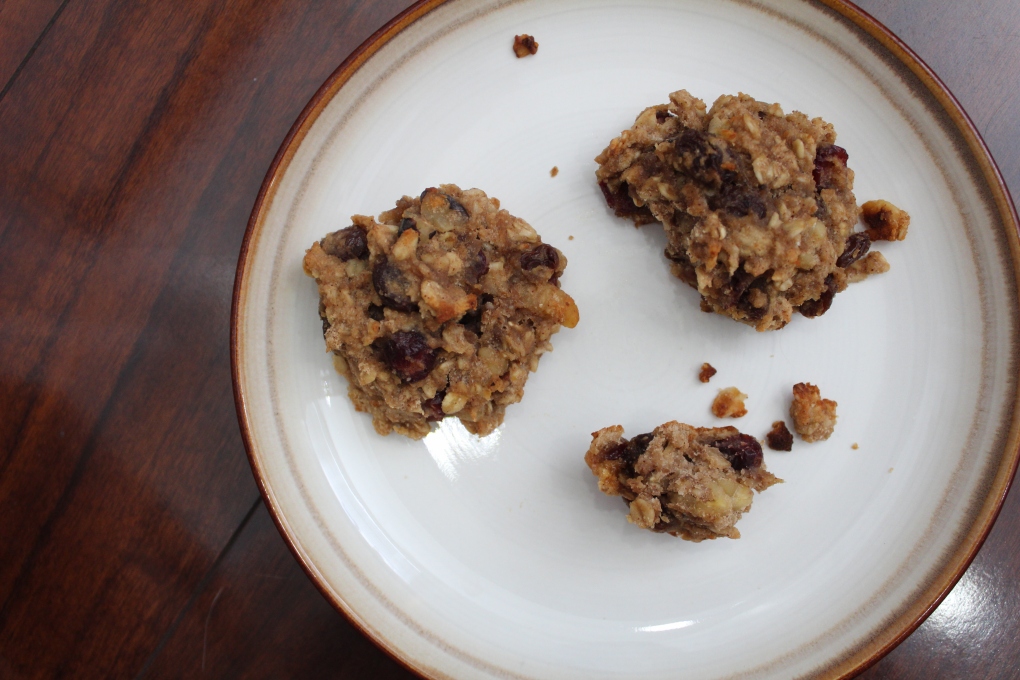 Add all wet ingredients (egg, coconut oil, peanut butter, and almond milk) and mix until well combined. This will be a chunky batter!

Lightly grease a cookie sheet. Scoop large spoonfuls of batter onto the sheet and use your hands to help form the shape of your cookie. Bake in the oven for 20-25 minutes or until the edges start to become a light golden brown. Let cool for 10-15 minutes before serving!

Happy 4th of July weekend everyone! I thought it was about time I posted a recipe (I feel like it’s been a while?), and this one turned out better than I had hoped it would! Of course, banana anything always has a place in my kitchen. I have done a handful of banana breads (vegan, gluten-free, regular, etc.) but tend to not really do muffins! I use to be a total muffin lover and would make apple, pumpkin, or whatever flavor I was feeling in bulk to have as snacks or part of breakfast. I haven’t made a good muffin in a while, so this recipe made a little appearance this morning in my kitchen!

I think the reason I like banana-flavored bread and muffins so much is they are so versatile. You can make them extra savory with cream cheese frostings, fillings, or fit them into your breakfast with a little spoonful of your favorite nut butter. You can also add a variety of ingredients to change up the flavor or texture such as nuts, oats, or chunks of other fruits such as diced apples.

These muffins are simple, easy, and use ingredients that I already had in my cupboard. They also cook fast, so watch your timer and be sure not to overcook them! Whole wheat flour tends to absorb a lot of liquid, so overcooking the muffins can dry them out significantly. I hope you give these a try and let me know what you think!

Side note, isn’t it kind of a bummer that the 4th falls on a Tuesday? The 4th of July use to be a huge celebration with my family. We would have a barbecue, go to the morning parade, dress up in red-white-and blue, and scramble for candy that people in the parade would throw to the crowd. It was a blast!! Jeff and I are going to spend some time at the pool with friends this 4th, which I am super excited about, but I need to start thinking about a little menu of pool snacks for that day. I will let ya’ll know if I come up with anything good! Have a great week everyone!

Add all wet ingredients (egg, coconut oil, vanilla, and almond milk) and mix until well combined. There should be few lumps, and the batter should seem light and airy.

In a separate, small bowl combine the topping ingredients, and mix with a fork to be sure the brown sugar, cinnamon, and coconut oil cover the oats. Set aside.

Lightly grease a muffin tin and put a few spoonfuls into each cup. The batter should almost come to the top of each cup. Top each portion with a spoonful of the cinnamon sugar topping. Bake for 20 minutes. Allow 10-15 minutes for the muffins to set before serving.

Check out my Facebook page for more nutrition articles and extras not found on the blog!

Check out my Facebook page for more nutrition articles and extras not found on the blog!